Holdfast: Nations At War will now be threading waters into the wonderful world of community-created modifications! It should come to no surprise that the team behind the game came from this very same background and with the release of the Holdfast SDK, we want to provide you with the tools to do the same.

In this major undertaking, we will be equipping our community with the ability to design, create and bring to life their very own maps, uniforms and flags within the game. The Holdfast SDK is fully integrated with Steam’s Workshop making the content you create easily accessible.

There are more features, changes and additions being introduced in Version 1.3. Come have a read of our latest blog post for all the details.

Supporting all existing game modes on both land and sea, the map editor accessed directly through Unity provides creators with a featureful set of tools to design and create maps using well over 1400 assets. 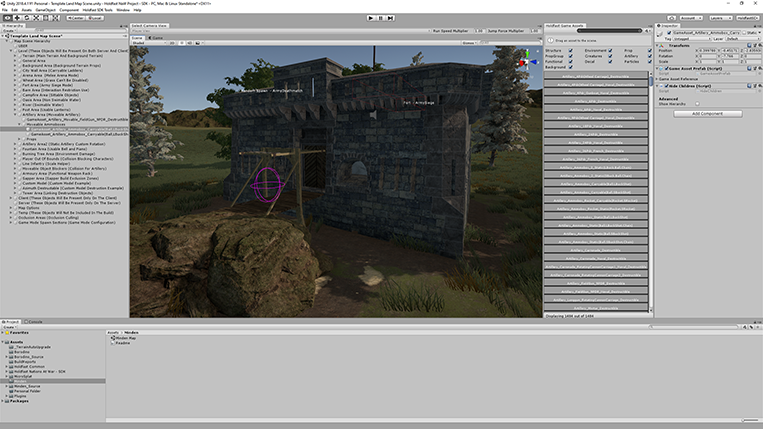 Ensuring that all of these game assets are made ready for use within the SDK was quite a substantial task to behold. Complimenting this collection of usable game assets to design maps with, we produced additional props that have yet to make a presence on any official maps.

Present in the SDK, you will find a new modular set of destructible siege walls, pillars, cannon emplacements, gatehouses, side entrances and shooting platforms varying in both style and size. Used correctly they will make for some delightfully immersive siege battles! Look for 'Structure_Siegewall, Structure_Farmwall, Structure_Gatehouse & Structure_Hayesaintewall' to view the models.

If you reckon that this is still not enough to bring your idea to fruition, the SDK provides you with the functionality to implement your own custom assets. 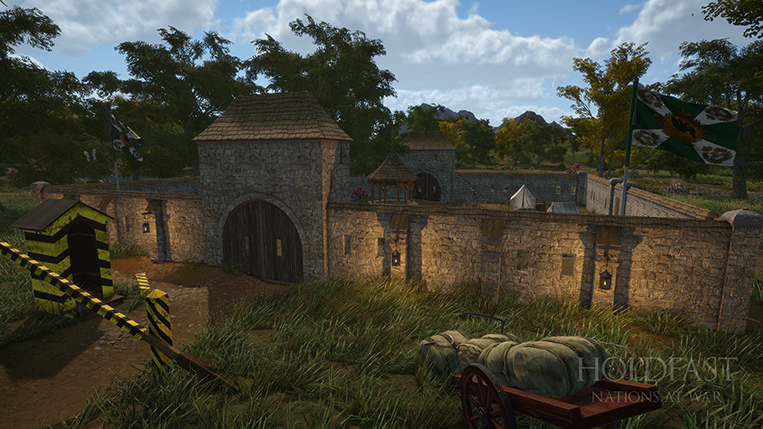 Inspired by the Waterloo Campaign - A pivotal moment in history that saw the fall of an empire, STOREY created 4 maps featuring the battles of Quatre Bras, Ligny, Waterloo and Wavre.

Beautiful in their design, they promote fresh and unique gameplay with close-quarter engagements happening on the streets of Ligny, structured terrain enabling flanking manoeuvres to occur resulting in the demise of regiments for those not careful of their surroundings during organised Linebattle play and many more. 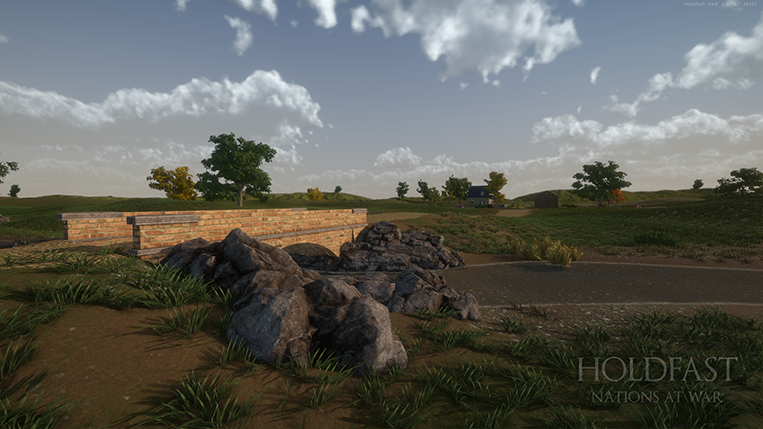 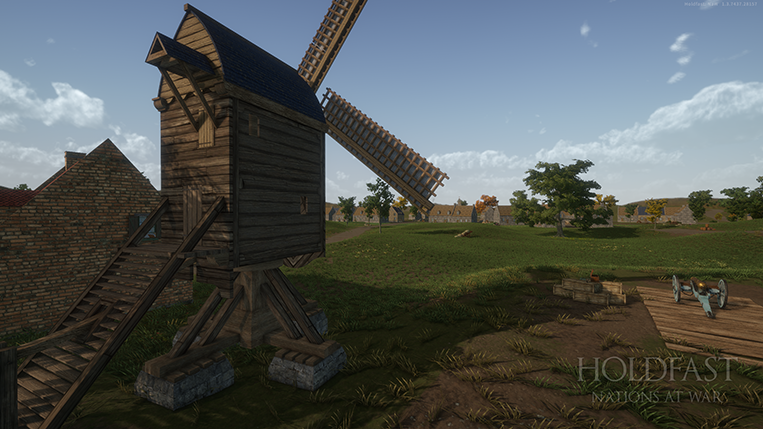 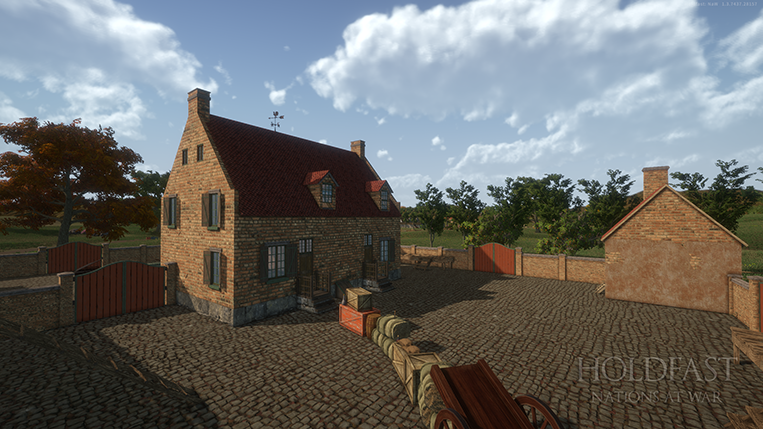 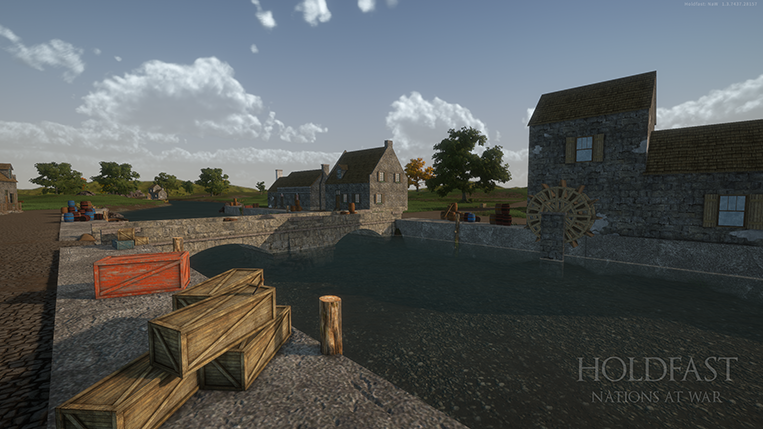 Occasionally you may find modded maps being played on official servers when organised Linebattle events are taking place. During these events, participants are encouraged to play in formations relevant to the Napoleonic era. Should you wish to make a presence yourself, you can find the #event-schedule on our Discord.

We cannot encourage you enough to give these events a go. They truly are a sight to behold. 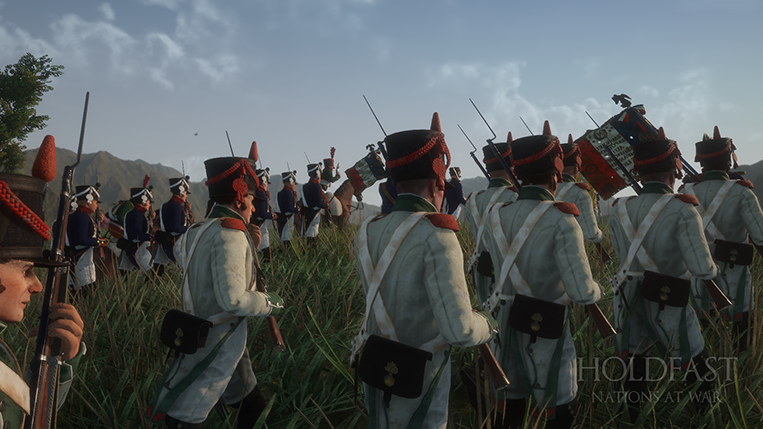 An extra step forward we’ve taken going above the scope of our roadmap enables you to design and create your very own uniform variations. Want to sport a regimental flag and uniform of your choosing during Linebattle play? Create the modification, install it on a community server and battle with your very own unit for everyone else too see.

Creators wishing to modify uniforms require a good deal of technical expertise as they must have knowledge on how to model a character, texture, preferably optimise and skin said character based off a template we provide.

Supporting this effort, players are now able to cycle through and select from multiple uniform variations for a particular class representing different regiments. Thanks to this addition you will no longer see twice the Line Infantryman classes in the spawn menu - Select the second variant using the arrow keys instead. For ease of use, we’ve also ensured that the game remembers your last selection. 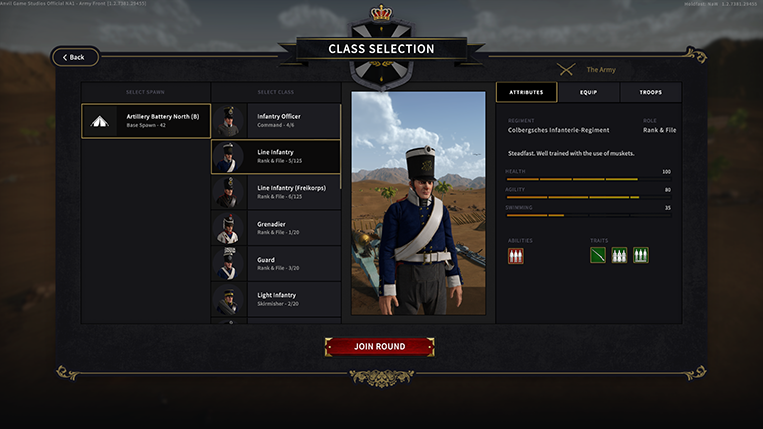 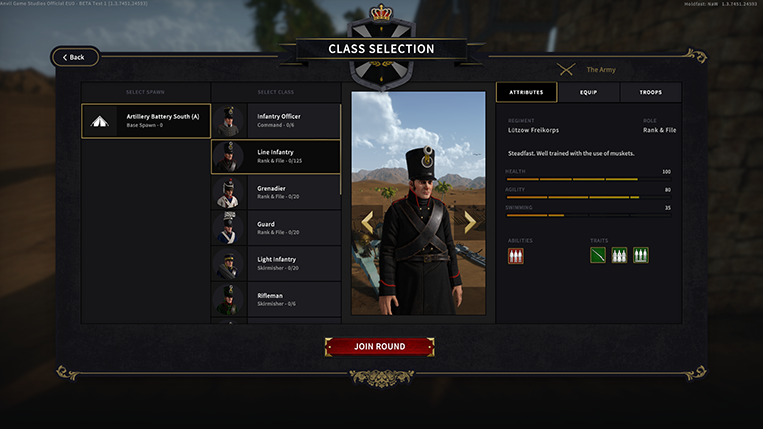 Consider this as your personal portal to showcase your creations! The Holdfast SDK is fully streamlined and integrated with Steam’s Workshop making the content you create very easily accessible. 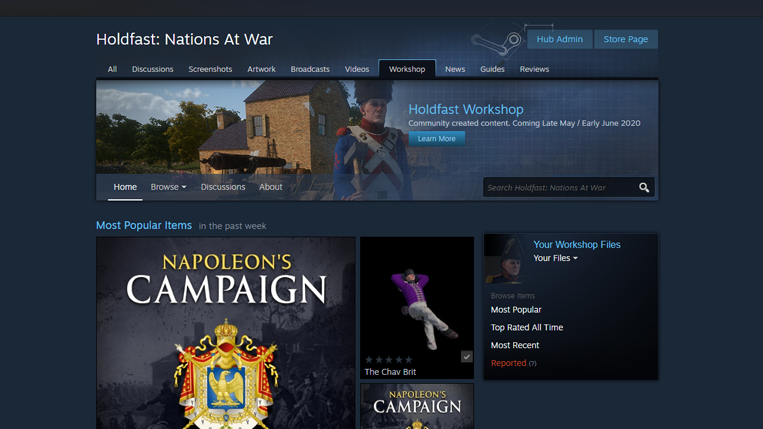 Getting everyone up to date with the latest versions for modifications prior to an event is definitely no easy task and we wouldn’t want anyone missing out. Fret not, however! We devised a two-click system allowing players to easily subscribe to, update or install modifications prior to joining their desired server.

Select the server to join after which you will receive a notification window instructing you to download or update the required modifications. Click on the ‘Subscribe / Update All’ button, wait for them to download then you’re ready to connect. It’s as simple as it can get. 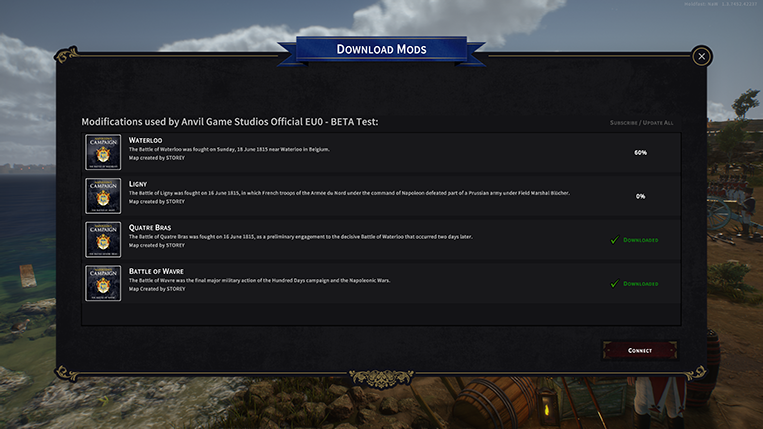 Community-created content is at the very core of this update’s release! Ever wanted to get creative with custom scenarios? There’s now a new interactable object which can be spawned directly through the server configuration file or within the SDK that will declare a faction the victor if interacted with.

It’s highly configurable as well. You can place it on any position that you so desire, customise the interactable label text, the required time a player must interact with the object before their faction is designated the victor, the classes that can interact with said object and more.

Steal intelligence, breakthrough jail in the name of liberty or have the player find their way through trap-ridden fields - It’s up to you to make of it what you will. 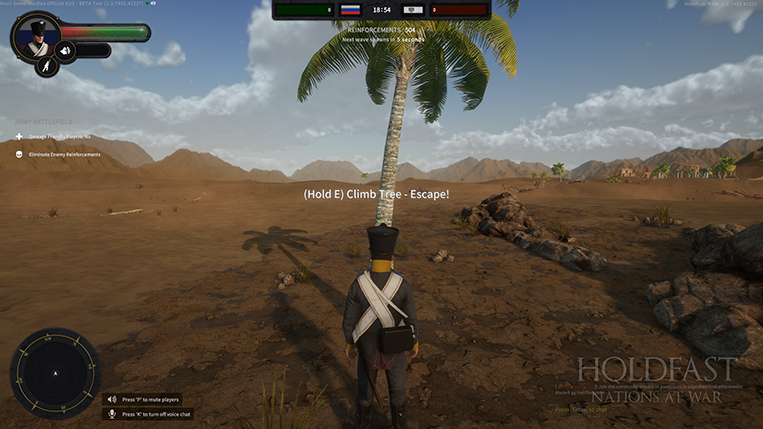 Covering over 100 pages worth of information, you will surely find a good use for this User Guide as you’re going around the Holdfast SDK. It takes you through the basic steps to get things started, best practices, working with the level editor, uploading to the Steam workshop, optimisations and more.

You can find a link to it on the Wiki. 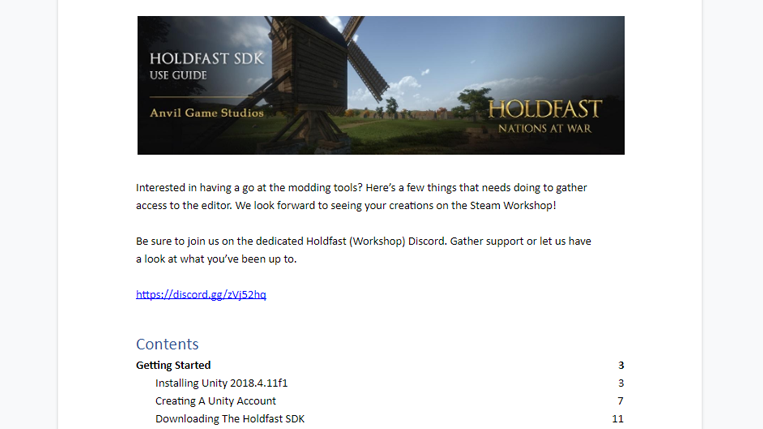 Looking for likeminded individuals focused on the use of the SDK? You’re most welcome to join us on the Holdfast Workshop Discord and help us spread the word around among those interested while you’re at it.

We will gladly give you a helping hand should you require so don’t shy away from asking any questions. You will also find members within the community familiar with the toolset willing to do so. 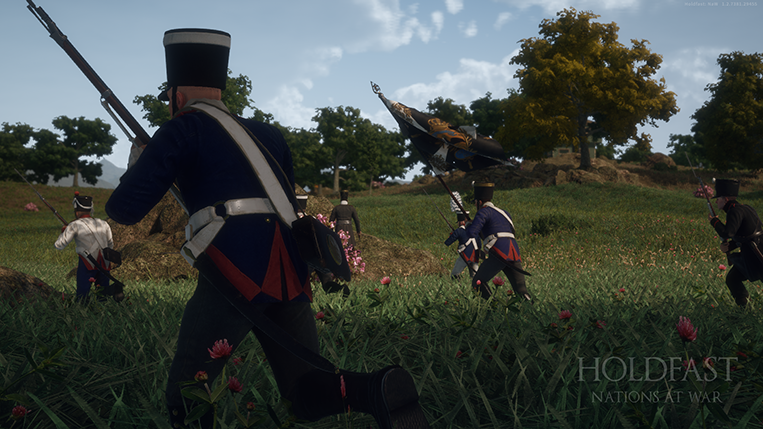 Have a read of the changelog below for all the changes and additions you will find in this update.

New Features
- Level Editor. Supporting all existing game modes on both land and sea, the map editor provides creators with a featureful set of tools to design and create maps.
» Over 1400 props to design maps with. Structures, flora, artillery, musical instruments, doors and many more.
» The ability to implement your own set of props and bring them into the game.
» The ability to customise your own terrain.
» The ability to designate custom props as destructible.
» Several tools to facilitate the creation of maps. This includes a function allowing creators to spawn with a player and move around on custom maps directly within the Unity editor saving precious time.
» The ability to upload modifications to the Steam Workshop directly through the SDK.

- Uniform & Flag Editor. Create your very own uniform variations for the existing classes present in Holdfast: Nations At War. This new functionality also allows you to sport your own regimental flag during Linebattle play.
» In support of this addition, you will no longer see twice the Line Infantryman classes in the spawn menu. Cycle then select the second variant of this class using the arrow buttons instead.
» The game will remember your last uniform selection variant.
» Creators wishing to modify uniforms must be familiar with 3DS Max.

- Steam Workshop Integration. Holdfast SDK is fully streamlined and integrated with Steam’s Workshop making the content you create very easily accessible.
» Combined with a two-click system allowing players to easily subscribe to, update or install modifications prior to joining their desired server.

- Custom Scenarios & Game Objectives. You will now find a new interactable object that will declare a faction the victor if interacted with. This can be spawned directly through the server configuration file or within the SDK.
» Steal intelligence, breakthrough jail in the name of liberty or have the player find their way through trap-ridden fields - It’s up to you to make of it what you will.
» Refer to our Wiki for instructions on how to make use of this new interactable object.
» » Holdfast Wiki - SDK User Guide

Server Administration
- The ‘ArmyLineInfantry2’ class enum is now obsolete and should be removed from the server configuration file.

SDK Documentation
- Guides to get you started with the use of the Holdfast SDK can be found on our Wiki.
» Holdfast Wiki - SDK User Guide

Quality of Life
- You can manage the modifications you are subscribed to through the game’s settings.

- You can access the Steam Workshop directly through the game’s main menu.

- Introduced an additional function in the server browser allowing players to filter by modded servers.

Bug Fixes & Changes
- Solved an instance which caused certain local 3D VoIP mutes to no longer persists between round.

- Solved an instance which caused players to get stuck on map load when switching between the Coastal Siege and Naval Assault game modes.

- Solved an issue which caused particle effects for when a firearm trajectory hits an object not to show.

- Solved an issue which caused melee indicators to incorrectly show when wielding a flag or a ramrod.

- Custom Map Naval now shows as ‘Open Oceans’ instead of ‘Custom Map’ in the server browser.

Plenty of marvellous creations took shape amongst our rather small group of closed-BETA testers and we certainly look forward to seeing what more everyone comes up with! Some of the best community-created game levels will be brought directly within the game through contests or other methods.

Be sure to stay tuned as there’s plenty more in store for the game! Yet another major update introducing new gameplay mechanics making Holdfast’s massive battles more engaging will be undergoing development. We’ll also be further expanding the possibilities of roleplay amongst many other additions that will surely come as a pleasant surprise to many.

Our excitement should for now be withheld and get back to work as there’s plenty that needs doing.

So once again we thank you for your support and until next time, may good health be yours.